Last Friday, I was fortunate to have been invited to a rare Omakase dinner at Nobu Manila in City of Dreams. This dinner featured our well-loved traditional Filipino recipes that were “Nobu-fied” by guest chef Ricky Estrellado, who is the Executive Chef of Nobu New York. He was in town to collaborate with Nobu Manila’s Head Chef Michael De Jesus. This dinner highlighted the collaboration of two talented Filipino chefs who have both worked with the renowned Chef Nobu Matsuhisa for years. Chef Ricky, who has worked with Nobu for 22 years, is the Executive Chef in New York, overseeing both the Nobu New York in Tribeca and Nobu Next Door. Meanwhile, Chef Michael, also a Filipino-American, started his nine-year career in Nobu Los Angeles then worked in Nobu Las Vegas, immediately before coming to Nobu Manila early this year.

The dinner’s indulgent eight-course menu highlighted the Nobu-style interpretation of Filipino classic cuisine. We started with : Sisig Foie Gras on a Gyoza Cone (yes, that’s sisig and foie gras in one!), Next was a delicious fish and vegetable combo of Ubod Salad Lapu-Lapu wrapped in Shiso Crepe Jalapeno and drizzled with Matsuhisa dressing. This was immediately followed by one of Nobu’s signature dishes, Yellowtail Sashimi, a dish that was unexpectedly reintroduced with a Green Mango Puree Salsa and Dried Bagoong. What followed next was something that cleared our palate: Spiny Lobster Tempura served in Miso Sinigang Broth. And then there were two entrees that evening : first, the Sous Vide Crispy Pata Amasu Ponzu, served with the delicious vegetable side dish of Rencon Laing (this is our laing made of Brussel sprouts!) This was followed by the second entree, delicious and nutty Beef Short Ribs Kare-Kare Anticucho. And then dessert came, which was the perfect example of what Filipino-Japanese fusion is all about : Nobu-Style Water Halo-Halo, which gave us all a delightfully sweet ending to the Omakase dinner’s full-on experience. A big congratulations to these two talented Filipino chefs, Chef Ricky Estrellado and Chef Michael de Jesus, who continuously innovate and shine light on our humble, local ingredients and traditional recipes. What a gastronomic feast that pushed the boundaries for our Filipino cuisine!

—
*Previously, I also wrote about Nobu Manila’s exciting and luxurious Sunday brunch (which is ongoing as of press time). Read about it here and catch it before it ends! 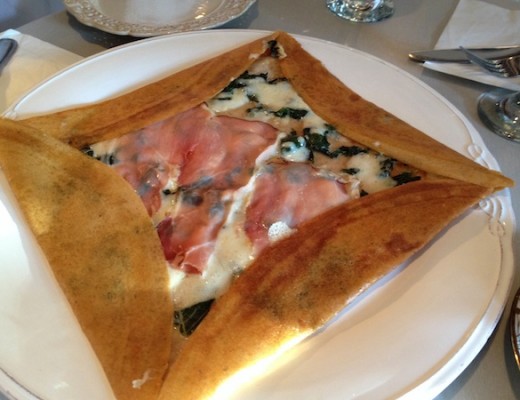 A Lovely Lunch at La Creperie From The Table of Shangri-La : A Fun and Fabulous Food Party