We’re 12 hours behind you, Manila, but I’m trying not to fall behind this time with my travel recap. It’s easier said than done because we tend to go to so many places in one day!

Our first stop is New York City: one of the most fast-paced and one of my favorite cities in the world! We arrived in the wee hours of the morning, which adds to the expected jet lag.

So, when the sun was up, the first thing I did was to take the kids out in the sunshine to help them adjust to our new time zone. Where else, but to go to Central Park? Central Park is a popular green space in the middle of busy Manhattan. There are usually a lot of attractions and activities, but for now, we just took it slow and enjoyed the scenery. We also went to Battery Park, which is at the southernmost tip of Manhattan and faces the New York Harbor. More than a tourist attraction, it is a historical site noted as the port where immigrants would arrive to find their fortunes in America, especially in the really early years (even before the Statue of Liberty arrived in the US!) Rigth across the waterfront of Battery Park is one of the New York City’s newest upscale shopping malls, Brookfield Place. The mall was impressive! I loved everything I discovered there: the luxury retails stores, French-style market, and their sophisticated food court. I do think the best thing about the place is their indoor palm trees! It gives the place this calm vibe and creates the perfect oasis from the busy streets outside. What’s the best way to experience New York City, especially if you’re a kid?  I took the kids to the top floors of the highest building in the city, the One World Observatory. It is on the 100th, 101st, and 102nd floors of the One World Trade Center and provides breathtaking panoramic views of  New York City. You can see its most iconic sites and surrounding waters. It’s a must visit, not just for what you encounter but for what it stands for: it is a tribute to the resilience of New York which has survived and surpassed the terrorist attacks of 9/11. Because of its height, it is now possible once again to see New York from the skies, a view that was obliterated when the Twin Towers collapsed. The One World Observatory is very forward-looking with a focus on the future and on technology. So many very impressive hi-tech features too, like floor-to-ceiling LED walls and time lapse videos. It has interactive exhibits kids of any age will surely enjoy from which they can learn about the city and the world, like this one: Of course, we have to visit the site of the tragic 9/11 attack, the World Trade Center 9/11 Memorial, which was next-door. On another day, we headed out to Rockefeller Center. It’s known for its outdoor sculptures and art installations. If you’re in New York, you need to see this guy (and have at least a photo op): This statue of Atlas is considered one of Rockefeller Center’s greatest Art Deco icons. It really is very imposing up close.

It gets better around Rockefeller Center, as most of my favorite shops are in this area! My other must-visit store here in NYC: Anthropologie!

Just take a look at their lovely in-store displays: Now let’s also make a stop at St. Patrick’s Cathedral, which is just right across Rockefeller Center. It’s quite magnificent, isn’t it?

Now of course, how can I not post the most quintessential New York icons:  Saks Fifth Avenue Department Store and the (infamous) New York yellow cabs? It can’t be anymore New York than that! 🙂 And that’s it for now. I promise more travel posts to come soon. Here’s to more timely posts…all thanks to my site partner Smart for keeping me digitally connected anytime and anywhere in the world! It is because of their efficient and reliable roaming service that I am able to live a #SmartLife especially when travelling!

Thank you to The Spoiled Mummy’s site partner, Smart, for making all these posts on Instagram and the blog possible. Finally, I now have a reliable data roaming service that helps me live the #SmartLife!  🙂 You may also want to check out their Free Instagram promo here : #SmartFreeIG. The Warwick : My Home Away from Home 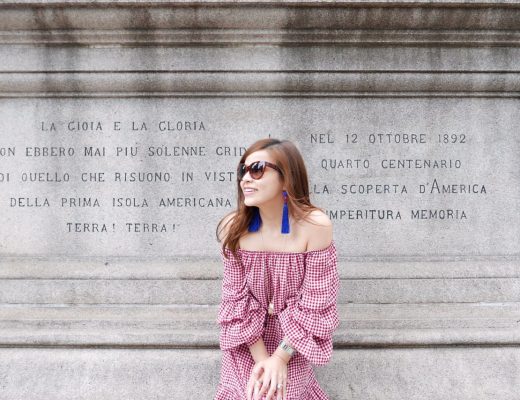 My Own Cronut Story